As Groovederci pulled into the docks at Bert Jabin’s Yacht Yard, crew members from the other Farr 40 programs stopped what they were doing, stood and applauded. It was a testament to how popular owner John Demourkas has become within the class.

Demourkas scored his first victory since joining the Farr 40 class in 2004, and boy was it a big one! The California skipper and his crew aboard Groovederci put forth a consistent performance over four days of racing on the Chesapeake Bay and captured the Farr 40 East Coast Championship.

Three days, three different leaders in the Farr 40 East Coast Championship. California skipper John Demourkas jumped to the top of the standings with a strong Saturday on the waters of the Chesapeake Bay.

Demourkas steered Groovederci to second and third place results in three races to seize the lead with 33 points, one better than Annapolis entry Ramrod. Just seven points separate the top six boats in the fleet so the championship will come down to the final day of the regatta.

“Contrary to forecasts, the breeze has been great and Annapolis has turned on a blinding regatta so far and I’m looking forward to a ridiculously close finish tomorrow,” said class manager Geoff Stagg. “With six boats still in contention, it’s going to make for spectacular racing. It’s the usual Farr 40 down-to-the-wire, dramatic last day of racing.”

Annapolis, MD – Alberto Rossi and his crew on Enfant Terrible turned in an outstanding 1-2 performance today to take the lead in Day 2 of the 2012 Farr 40 East Coast Championship. If his lead holds for the remaining two days of the event, it would help solidify his lead in the four-event Farr 40 US Circuit leading into this year’s Rolex Farr 40 World Championship held in Chicago in September.

Rossi is no stranger to success: besides his prowess in Farr 40 Class racing, he and his team are also the reigning ORCi Offshore World Champions, having won the Class A title last year in Cres, Croatia in conditions that often replicated what the Chesapeake offered today.

Perfect conditions yield three races, yet over half the fleet is still within one point in overall scores

"We're happy to be in the lead at this stage," said Jabin, "but it sure wasn't easy. We had some new sails delivered a few days ago, and no breeze to learn how to get them set up, so when the breeze came up it was a big scramble. But the class is also very tough, and it's been a while since we've been racing these boats at this level."

In fact, the last Farr 40 event Jabin sailed was here in Annapolis at the Rolex 2010 North American Championship, which he won decisively in a mostly-local 9-boat fleet. But with teams from Germany, Italy, Monaco, Turkey and the US here this week, the fleet is of higher caliber and on a mission: the Rolex Farr 40 World Championship held in Chicago in September. No wonder the next six places in the standings are bottle-necked in tie-breaks for 14 and 15 points.

RESULTS UPDATED THROUGHOUT THE EVENT

Alberto Rossi and his Enfant Terrible crew celebrate their victory. Click to enlarge.
Although breeze was lighter and shiftier in comparison to the previous two days of racing, the Farr 40 Class and the Storm Trysail Club Race Committee were able to complete a full day of racing today for the final day of the 2012 Farr 40 USA Circuit Championship Event #2. With ESE winds at 6 to 10 miles per hour the class was able to get in the full 10 races as detailed in the NOR. The courses were shortened throughout the day, with legs as short as one mile leaving little or no room for mistakes at the starting line. Boats at the start of Race 8 were very slow off the line, half going right and half choosing the left side, and it was apparent early on that the right side of the course was the place to be. Alberto Rossi's Enfant Terrible sailed a flawless race, with Wolfgang Schaefer's Struntje Light coasting downwind just behind them. John Demourkas' Groovederci paid the price for going left, and finished the race 8th, just after Barking Mad.

Race 9 proved to be just as shifty, but this time the left was favored, and Jim Richardson and his team Barking Mad sailed a near perfect race, finishing first and closing the gap on Enfant Terrible. Struntje Light sailed another impressive race and demonstrated their light air skills by landing themselves another second place finish, just ahead of father and son team Helmut and Evan Jahn on Flash Gordon and Nico Poons' Charisma.

Race 10 belonged to Enfant Terrible who made sailing look easy and winning look good here in sunny South Beach. The race committee wasted no time resetting the weather mark and getting in the final race of the event, with the unpredictability of the standings at hand, the last race could stand to benefit more than one team and alter their standings. With a mere 20 points total and 6 first place finishes, Enfant Terrible is the winner of the Farr 40 USA Circuit Championship Event #2 turning the tables on Barking Mad's Event # 1 win in Key West.

The Farr 40 Class Association would like to thank everyone involved in making this event a huge success, including the eight participating boats from four countries, Storm Trysail Club Race Committee and the panel of judges.

The Organizing Authority (OA) was the Farr 40 Class Association in conjunction with The Storm Trysail Club (STC). The Farr 40 Class is pleased to bring you high quality race images from each day as well as live event updates from the racecourse via Twitter and Facebook. This year our press and media sites are complete with links to onboard video footage from participating teams to bring our friends and spectators that extra level of coverage of the Farr 40 USA Circuit Championship Event #2.

We would like to thank the following local businesses and hotels for their support: Miami Beach Marina, Monty's Poolside, La Piaggia Beach Club, The Avalon Hotel, and The South Seas Hotel. We look forward to welcoming teams May 24 - 27th to the 2012 Farr 40 USA Circuit Championship Event #3, which takes place on the Chesapeake Bay in Annapolis, MD. For further information on the next class sanctioned event, please visit our website: www.farr40.org

Photos of the last two days racing can be found here: saraproctor.smugmug.com/Boats/2012-Farr-40-USA-Circuit 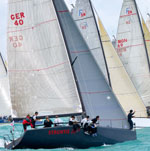 The Farr 40 Class could not have asked for better racing conditions today in Miami Beach for Day 3 of the 2012 Farr 40 USA Circuit Championship Event #2 as temperatures were in the mid 70's, and sailors zipped around the race course with wind from the ESE at a consistent 12-15 knts. The Storm Trysail Club Race Committee was able to pull off an impressive 4 race day, quickly starting one action packed race after another.

The competition wast tough today and mark roundings were closer than ever, with the Rolex Farr 40 World Championship in Chicago only six months away and the Annapolis Circuit Event #3 taking place on the Chesapeake Bay in May, sailors made few mistakes in an attempt to outrank the competition on the Circuit Leaderboard.

It was decided late Wednesday morning to call off all racing for the first day of the 2012 Farr 40 USA Circuit Championship Event #2 as high winds off South Beach gusting to around 30 knots and a very unpleasant sea state resulted in a unanimous vote by owners and the race committee to forego racing for the day and try again tomorrow. Teams anxious to race prepared their boats this morning knowing that this was the likely outcome of todays forecast, but in the end the safety of the crews is not worth risking by racing in conditions like these.