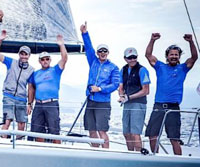 Santa Barbara, Calif. (July 18, 2014) - Skipper Alberto Rossi and his team aboard Enfant Terrible sure know how to close out a tight regatta. Holding a narrow one-point lead going into the final day of the Farr 40 West Coast Championship, the Italians went out and won the opening race then survived a match race duel with chief challenger Flash Gordon 6 during the second race to secure the overall victory.

Enfant Terrible wound up winning four of 11 races over four spectacular days of racing to capture the West Coast Championship with a low score of 44 points, one better than skipper Helmut Jahn and his crew on Flash Gordon 6. Voodoo Chile, a Corinthian entry owned by Lloyd Clark of Tasmania, put forth an impressive performance for a team with just two professionals to take third with 48 points.

"It was a tough day and we had to fight very hard to hold our lead, which makes this victory even more satisfying. We are really thrilled, really excited to win this regatta," Rossi said. "Flash Gordon was very fast and very well sailed so to beat them is quite an accomplishment."

Enfant Terrible put itself in the driver's seat by winning Race 10 in convincing fashion, leading at every mark and crossing the line a couple hundred yards ahead of the second place finisher. That gave the Italian entry a two-point lead over Flash Gordon 6 going into the final race.

Jahn and his afterguard agreed the best way to put two boats between Flash and Enfant was to go after the Italians and try to push them back. That strategy worked to some extent, but Enfant managed to stay with its rival and finished Race 11 in eighth, one place behind Flash.

"Flash was hunting us and it was match racing for sure," Rossi said. "It was a difficult situation because we had to be very careful to not finish too far behind the third place boat (Voodoo Chile). We were fortunate that it worked out in our favor."

Afterward, Jahn felt that engaging Enfant in a tacking duel during Race 11 was the right thing to do. Ian Williams, tactician aboard Flash Gordon 6, is a four-time champion on the World Match Racing circuit and thus knows the game well.

"We chose to chase Enfant. We made a decision to possibly sacrifice our second place in order to try to win the regatta," Jahn said. "If we had simply sailed our own race, I don't think we would have been able to put two boats between us. We tacked on each other and did everything possible to slow each other down. It was certainly a match race within a fleet. We were hoping that Enfant would get mixed up with some other boats, but it didn't happen."

Enfant Terrible struggled with its light air speed during the two previous regattas, finishing fourth at the Rolex North American Championship and fifth at the California Cup. When Rossi learned that four members of his regular crew, including tactician Vasco Vascotto, would be unavailable for the West Coast Championship he briefly considered withdrawing.

"I thought about not coming, but after the experience in Marina del Ray I felt it was important to do another regatta and figure out what we needed to do," said Rossi, who believes a slight adjustment in rig tune solved the problem.

Flavio Favini, who has enjoyed tremendous success on the Melges 24 circuit as helmsman of Blu Moon, replaced Vascotto as tactician and clearly acquitted himself quite well.

"This was my first time sailing with Flavio and it was a fantastic experience. He is very calm on the boat and his overall approach is different than Vasco," Rossi said. "Flavio is a fantastic Meanwhile, Jahn was quite satisfied with the runner-up result as Flash Gordon 6 displayed terrific boat speed throughout in placing third or better in six of 11 starts. "We take a lot of confidence from this regatta because we know the boat is fast. Congratulations to Alberto and his team, but we would much rather win the world championship."

Taking third was rather unexpected for Voodoo Chile as owner Lloyd Clark only recently purchased this particular boat, which was previously owned by Crown Prince Frederik of Denmark. A cross-country delivery from Newport to Santa Barbara was completed about a week before the regatta and the crew only had a few days to put the boat together and conduct some on-water testing.

Adding to the difficult circumstance was the fact Voodoo Chile was racing with three new crew members who had never sailed with Clark before. Tactician David Chapman and mainsail trimmer Mal Parker were the only pros aboard the Tasmanian entry, which won two races and placed second or third in five others.

"Chappo made some great tactical calls while Mal did an awesome job of getting me uphill," Clark said. "This is a very good result for us and we are thrilled. All credit to the crew, they did a wonderful job."

Skipper Kevin McNeil steered Nightshift to Boat of the Day honors on a rainy afternoon that featured 8-10 knot southwesterly winds. Eric Doyle called tactics for McNeil, who posted a fourth and a second on Saturday to finish strong.

"We finally got off the start line in decent shape and had more control of our destiny. We were able to sail our own race, which was nice for a change," said McNeil, who absorbed three double digit results on Wednesday and Thursday, but turned things around and finished no worse than sixth on Friday and Saturday.

"We had a couple tough breaks and didn't sail very well the first couple days," he said. "We have it in us to win a regatta, but we have to find a way to start strong and finish strong instead of just one or the other."

Farr 40 class manager praised the performance of principal race officer Peter "Luigi" Reggio, who fired off 11 races in conditions that ran the gamut.

"We had a bit of everything in terms of breeze and when that happens the true winner comes to the fore. Enfant Terrible sailed a fantastic regatta and deserved to win," Stagg said.

Santa Barbara Yacht Club, of which Groovederci owner John Demourkas is a member, hosted the 15-boat fleet and wowed all the sailors with its gracious hospitality. Several owners went out of their way to describe the club's location overlooking the Pacific Ocean as "stunning" and said the facilities and staff were first-class in every respect.

"The Santa Barbara Yacht Club did an absolutely splendid job," Stagg said. "It is one of the best clubs I've been to for a long time. The members were very, very welcoming and treated everyone associated with our class just wonderfully."

The Farr 40 class would like to thank North Sails Graphics, the official graphics supplier for the West Coast Championship.