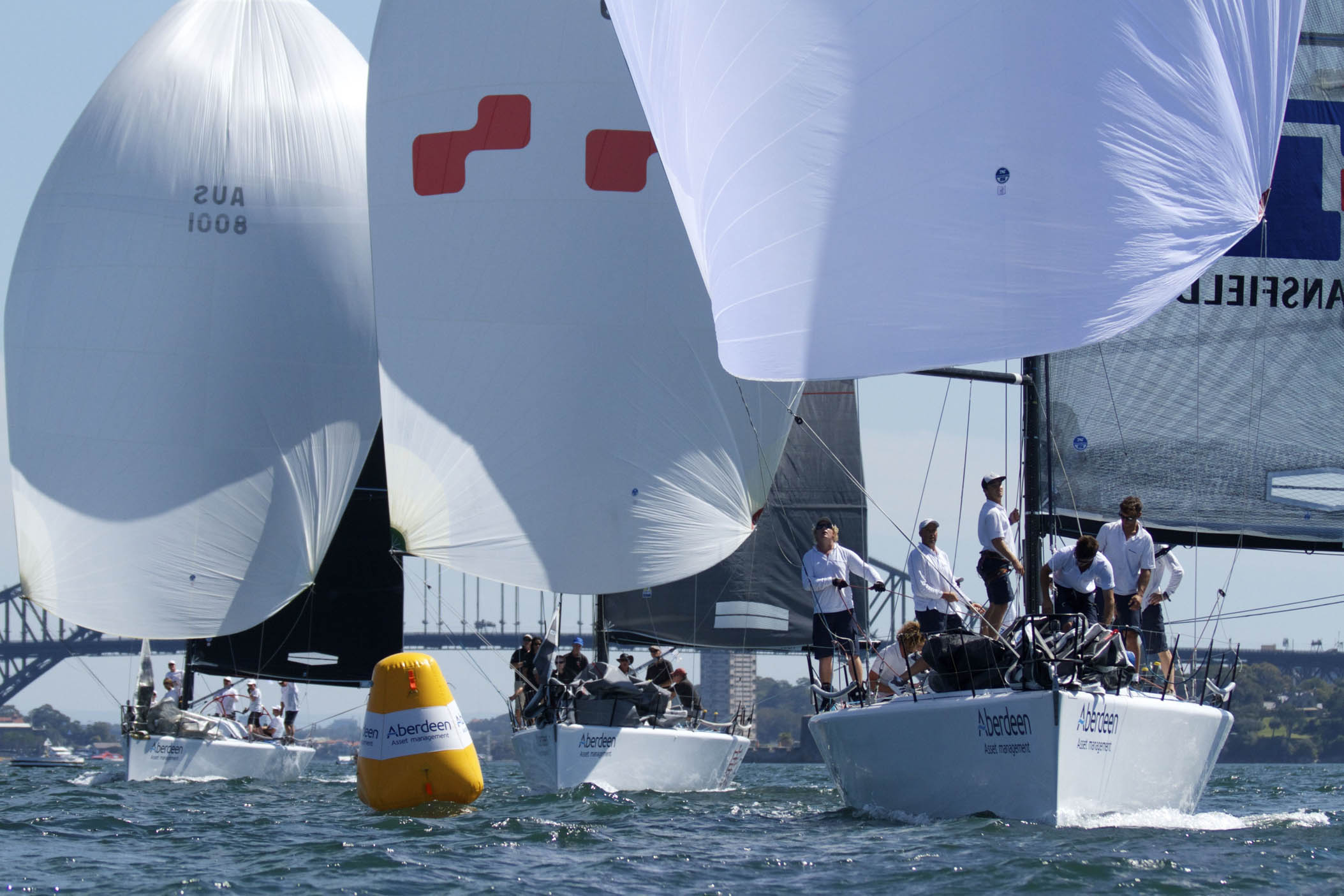 “You can’t win a regatta on the first day, but you can lose it,” reminds the leading Farr 40 skipper Guido Belgiorno-Nettis after day one of the Aberdeen Asset Management 2015 Farr 40 National Championship for the John Calvert-Jones Trophy.

He’s satisfied Transfusion is in a defensible position, yet a countback is the only mechanism separating the top Sydney team from the Andrew Hunn steered Voodoo Chile sailing for the Royal Yacht Club of Tasmania after the opening four races on Sydney Harbour.

Smart tactical calls by Katie Pellew-Spithill and strategist Mike Leigh put the Middle Harbour Yacht Club based Transfusion, a five time Farr Australian champion and the defending Farr 40, into position for a couple of tremendous starts and picks of the track. Even when they were deep in the third race, good tactics brought them back from the brink into second.

“Overall it was a good day’s sailing though a bit of a lottery for the second two races. We are very happy with how the day finished up; we are in a good position to maintain our lead. I have a really great crew, they never give up until we’ve crossed the finish line,” Belgiorno-Nettis said this evening as competing crews enjoyed a dockside BBQ at the Royal Sydney Yacht Squadron on the harbour’s edge on a warm autumn afternoon. 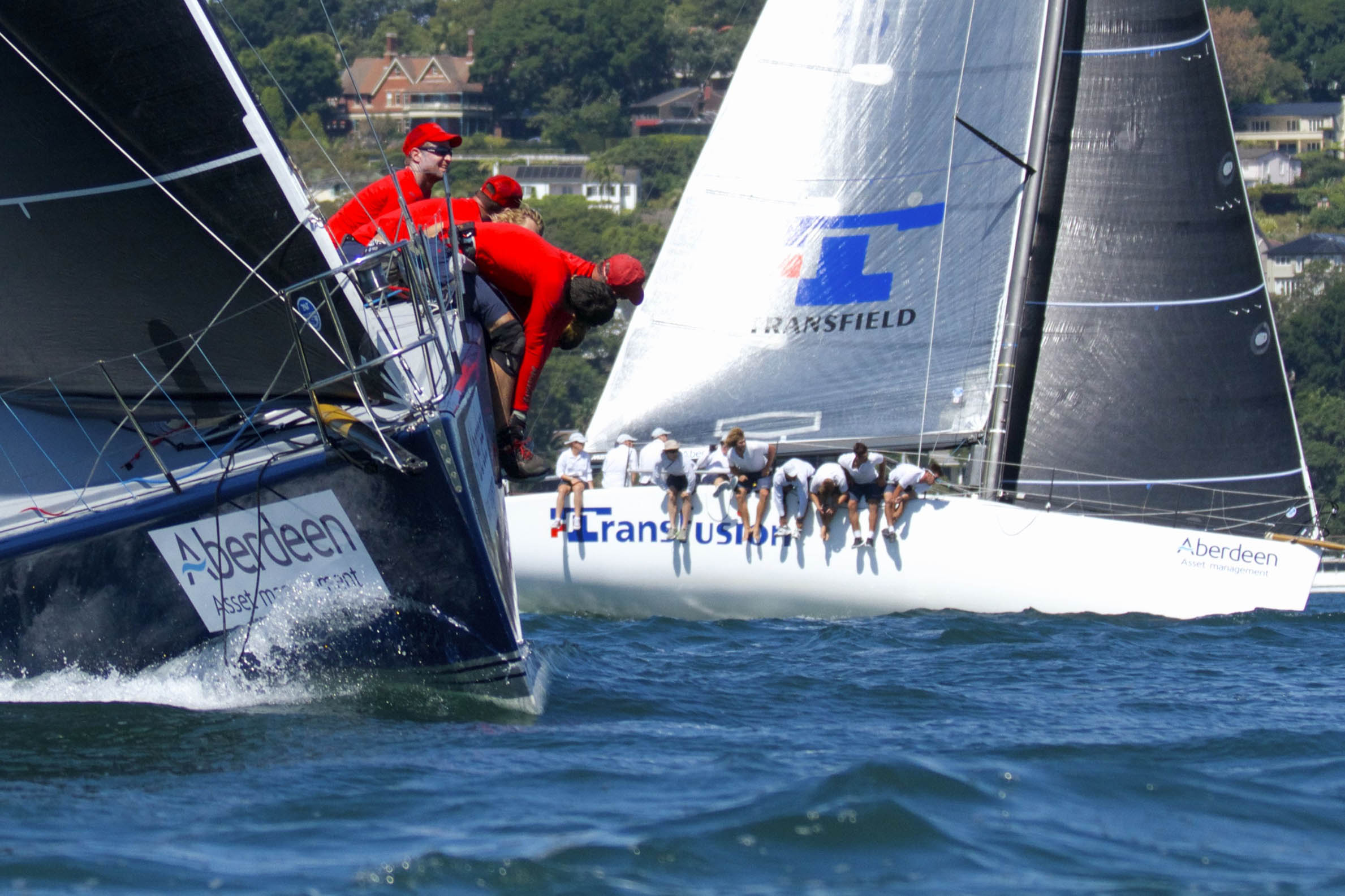 JCJ Nationals 2015 Voodoo Chile Transfusion credit: Pete HarmsenHe’s a big believer of creating team unity, and the conversion to results. This season a child’s pink slipper on a lanyard hung off an offending crewmember represents that cohesion, and has generated plenty of laughs. Pellew-Spithill was first up to wear the Transfusion pink slipper ‘award’ at the nationals, for her antics misreading the sailing instructions during a women’s race last weekend. Being miles out in front and not knowing the course didn’t fare well for the Farr 40 crew, with the boss’ wife on the helm.

Barely three hours into her public humiliation this morning and bowman Mitch White was the new awardee, thanks to a “big bloody mess” up the front.

Hunn and co-owner Lloyd Clark’s Voodoo Chile is the Farr 40 season pointscore leader by a margin of two points over Transfusion. The mostly Tassie team has locked horns with Transfusion at every encounter;  now they have two days and eight races left to show they are the stronger, smarter bull, and worthy of the Australian champion’s crown.

Transfusion and Voodoo Chile finished the day on nine points and Jeff Carter’s Edake is within reach on 12 points in third. There were plenty of holes in the average 8 knot WSW breeze on the harbour and Carter said it was a matter of hanging in there. “You just had to keep quiet and wait for the next shift to come your way to climb the ladder. We were lucky to get four races in. Today was one of our better first days.”

Carter praised the combination of his long time tactician Evan Walker and strategist Jack Brieslin, and given the stop-start nature of the day he felt his mainsheet Noel Holder deserved a special mention for his continual fine-tuning of the mainsail and rig settings to keep the power in the boat.

Please find below the day 1 video highlights from the Aberdeen Asset Management 2014/15 Farr 40 National Championship for the John Calvert-Jones Trophy.

Further information:Jennie Hughes
Farr 40 Class Administrator
M: 0407 387 302 E: This email address is being protected from spambots. You need JavaScript enabled to view it.

E: This email address is being protected from spambots. You need JavaScript enabled to view it.