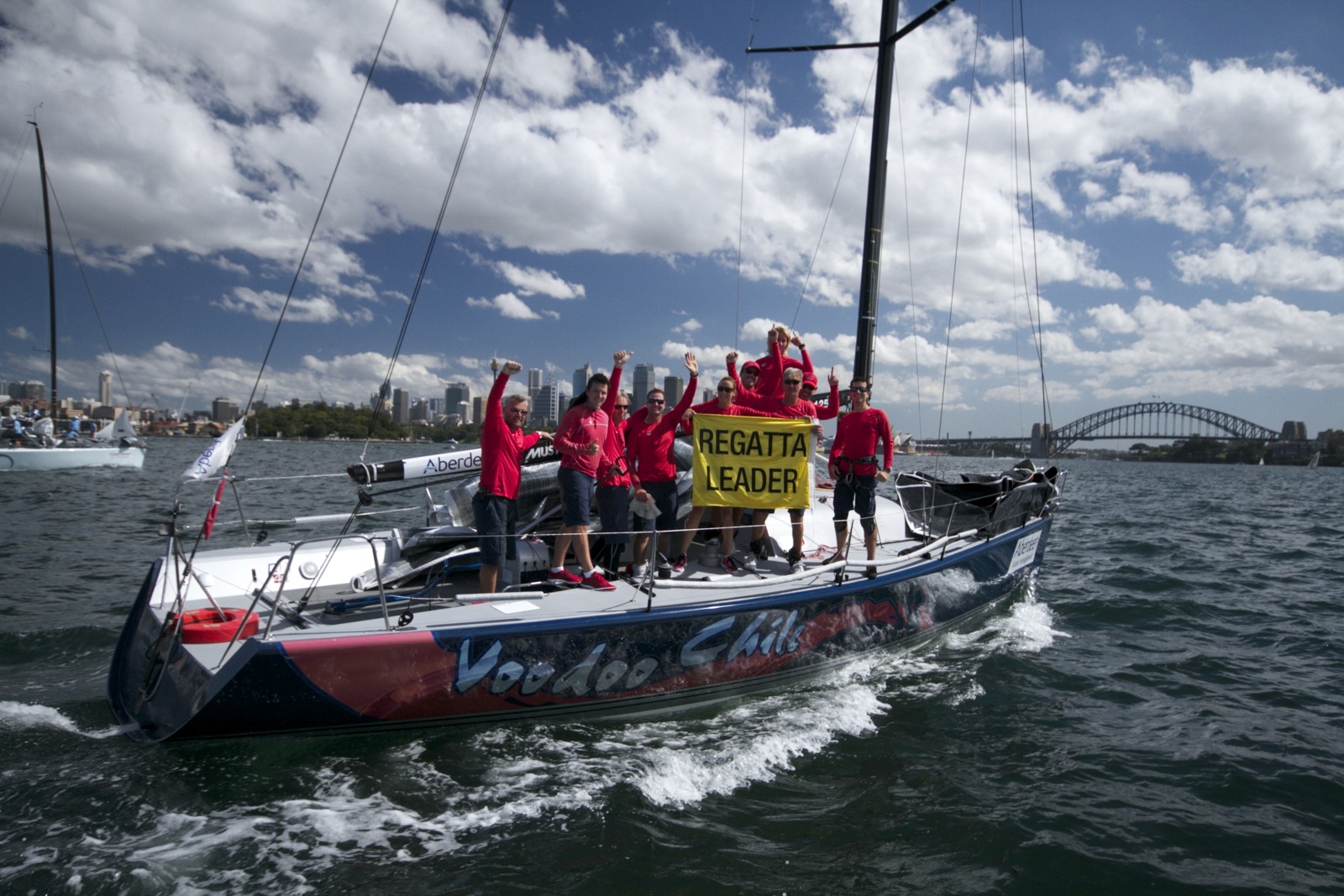 It’s been a four year endeavour and this afternoon the Tasmanian crew on Voodoo Chile were declared Australian Farr 40 champions.

“We first came up to Sydney in 2008 and went away with our tail between our legs,” said a glowing Andrew Hunn, co-owner of Voodoo with his boat partner of eight years, Lloyd Clark. “In 2011 we finished top ten at the worlds in Sydney and decided we would build on that.

We are fully chuffed to have pulled this regatta off. It’s fantastic to get up because of the competition; I don’t think I’ve ever seen such a battle for second.”

Hunn said it was an honour to sail their final three of a 12 race series on Sydney Harbour in front of yachting legend Sir James Hardy and Farr 40 class manager Geoff Stagg, out from the USA for a site recce for next year’s Rolex Farr 40 World Championship in Sydney.

An even bigger highlight for the crew was looking across to the Chapman spectator boat to see the ‘Red Panda’, the nickname for Clark who took a quick trip back to Hobart overnight and was back on the course today to nervously count the points and give the thumps up to the winners from the Deep South. “We weren’t expecting to see the Red Panda; it really gave the boys a lift. No question,” Hunn added.

Clark has in turn gifted his own nickname to Voodoo Chile’s tactician David Chapman, always known as ‘Chappo’ and now also called ‘Sachin Tendulkar’, in reference to the former Indian cricketer’s own nickname, ‘The Little Master’.

Guido Belgiorno-Nettis and Transfusion finished second by six points. The five time Australian champion team was forced to muster something special for the final race 12 or face the prospect of finishing out of the top three, given four of the six boat fleet had a foothold on second overall.

“We pulled off a second in the last race and got back on the podium so we go home with a little bit of silverware,” Belgiorno-Nettis this afternoon, Saturday March 28, 2015 dockside at the host Royal Sydney Yacht Squadron. “A very deserving Australian title win to Andrew and Lloyd and their great crew. They have been working very hard for a long time; in my view Voodoo is a world championship crew. If you are going to be beaten by somebody it’s a pleasure to be beaten by them. The championship has gone to the most deserving in the fleet.”

Sydney Harbour on a Saturday is hectic and club races for Ynglings, Etchells, Dragons and all other manner of vessel required another layer of judgment, on top of the 20 degree wind shifts from the south to SE at an average 10 knots. 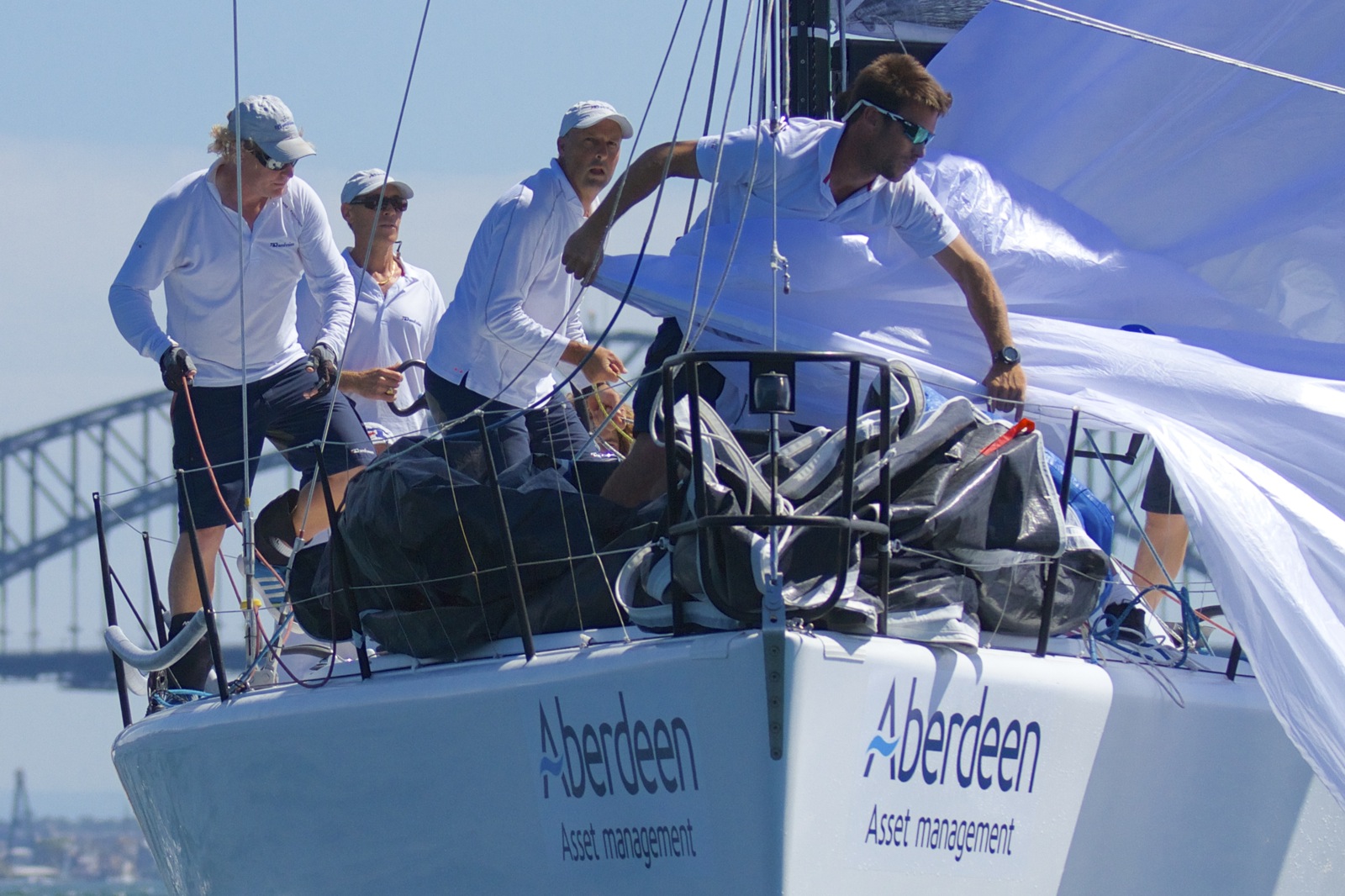 “Aberdeen has been a fantastic sponsor, we hope they enjoyed the experience and we thank them again for their extraordinary support of the class. It’s very much appreciated,” acknowledged Hunn, the class President.

Aberdeen’s Australian managing director Brett Jollie responded, “I’d like to thank everyone involved with the Farr 40s over three series. We’ve had a wonderful association and I’m very appreciative of the effort to support Aberdeen and our guests. Congratulations to the owners and crew for their efforts over the last few days; it’s been a fantastic spectacle with the backdrop of one of the most beautiful cities in the world. Congratulations to Voodoo Chile, to Andrew, Lloyd and the crew for taking out the national title for the 2014/15 season.”

Some in the Aussie fleet will head to the USA in a few months’ time to join the international circuit for the West Coast and North American championships, and the Rolex World Championship at Long Beach, California in September.

Further information:Jennie Hughes
Farr 40 Class Administrator
M: 0407 387 302 E: This email address is being protected from spambots. You need JavaScript enabled to view it.

E: This email address is being protected from spambots. You need JavaScript enabled to view it.