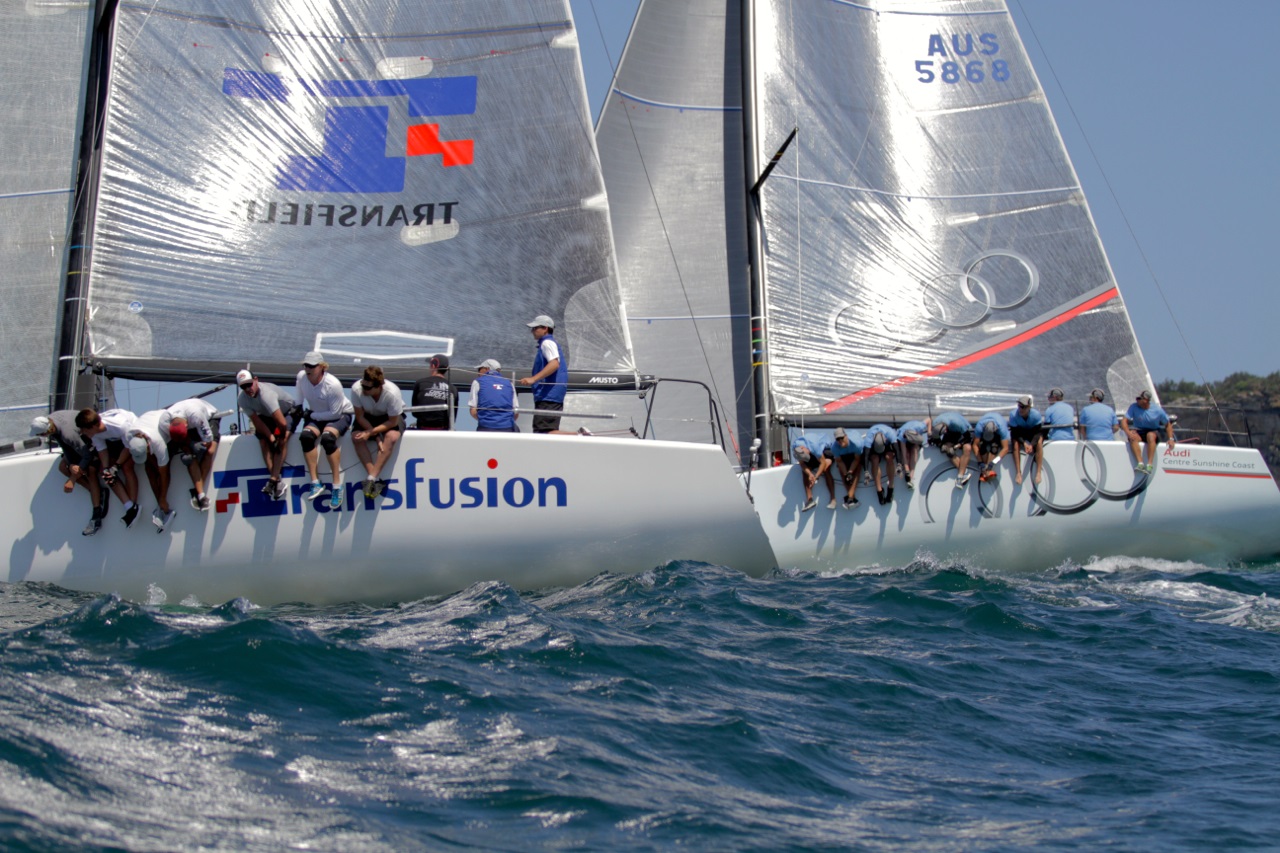 The Farr 40 Australian Open Series might have convincingly belonged to the multiple national and 2011 world champions, Guido Belgiorno-Nettis’ Transfusion, but new class president Rod Jones is keen to point out five from the seven boat fleet wrested a win during the season opener.

A seven point difference from Transfusion, racing for the host Middle Harbour Yacht Club, back to Jones and his Kindergarten crew in second, gives the runners-up a target. “We all watched the Transfusion guys be the best out there; they execute at a higher level,” Jones said. “I don’t have any doubt we have better boat speed in all conditions this season, however we are still not executing at the level Transfusion is, and that’s the difference.

“Plusses are we’ve found speed and the crew is gelling. Our tactician Steve McConaghy is not only qualified but fits into the team beautifully. We just need more time racing; we see the benchmark and we know what we have to do,” Jones summed up.

Third overall after eight races on Sydney Harbour was Rob Reynolds’ Exile, steered by Rob’s brother Tony for the new campaign’s promising maiden outing. And though Gordon Ketelbey’s Zen finished in the second half of the rankings, his MHYC crew nabbed two bullets yesterday in the building nor’east sea breeze that peaked at 17 knots.

De Kock, at the helm of what he believes is the oldest Australian Farr 40, and his crew had an hour’s sail on Friday evening then went out Saturday morning and scored a second in their first ever race. It was far from beginner’s luck given the skipper’s sailing pedigree plus Brisbane based Etchells gun Matt Chew was calling tactics, ably assisted by Richard Howard, Wulf Wilkens and de Kock’s own talented 15 year old daughter Karma in the middle.

Good Form was classed an insurance write-off after hitting rocks at Barrenjoey Headland and breaking the keel and keel frame. It’s been sitting in de Kock’s Newcastle boatyard for years collecting dust and was annoyingly in the way until the boat builder and his shipwrights finally found the time to finish the repairs and wet the hull.

“Everyone says you can’t turn up and win in this class,” de Kock said. “I would like to have done better than our final results, and we had our moments but there’s a limit to what you can expect I guess. It is frustrating when you are slow and can’t figure out why but now we know what we need to do to prepare for the Pittwater series in December, then the state titles and nationals at the end of January.”

From Yeomans’ side, other than three OCS and one of the late-coming Farr 40’s collecting a committee flag from the finish boat in unconventional fashion, the race management was straightforward and the racing great to watch. “There were lots of lead changes and if someone had a bad tack or gybe they got rolled,” noted the PRO. “My thanks to Jennie for her dulcet tones counting down to the starts.”

All competing crews enjoyed the afternoon trophy presentation at MHYC and look forward to getting together next month for a training weekend on Sydney Harbour, November 7-8.

Jennie Hughes
Farr 40 Class Administrator
M: 0407 387 302 E: This email address is being protected from spambots. You need JavaScript enabled to view it.

Lisa Ratcliff
On Course Communications/Australian Farr 40 media
M: 0418 428 511
E: This email address is being protected from spambots. You need JavaScript enabled to view it.