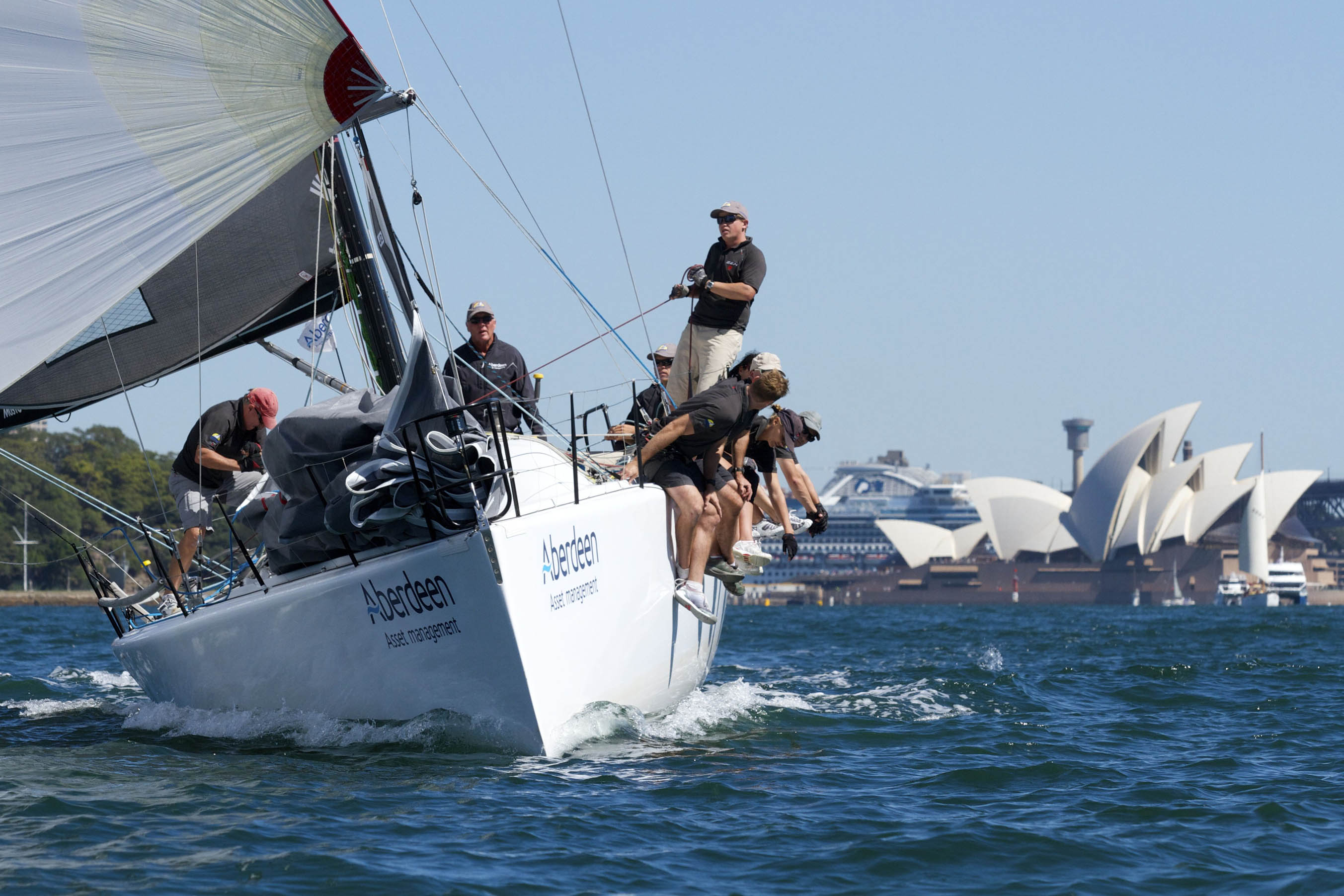 A “brain-boggler” second day at the Farr 40 nationals on Sydney Harbour is Transfusion crewman Will Mackenzie’s take on the five race outing where vexed tacticians made calls then crossed their fingers and hoped for the best, three different owners claimed bullets from five races, and there’s a new pointscore leader.

Andrew Hunn and Lloyd Clark’s Voodoo Chile is ahead by a six point break over Guido Belgiorno-Nettis’ Transfusion. Two wins for Gordon Ketelbey and tactician Sean Kirkjian shuffled Zen up into third, two points behind Transfusion, and makes them lead Corinthian entry.

“We are ahead but it’s not comfortable. It never is in this fleet, we push each other the whole way,” said Voodoo’s tactician David Chapman. Though Royal Sydney Yacht Squadron is his home club and he knows the harbour from north to south, Chapman found today maddening in terms of decision making. When a westerly breeze drops out to 5 knots then gusts under the Sydney Harbour Bridge at 20kts and flicks left and right, from WSW to WNW and back again, there is no harder job than a tactician’s.

“It was horrible. We just tried to stay in phase, sometimes even if you are in a lift or knock you have to continue with it to find a bigger shift,” Chapman said. “There wasn’t much of a pattern and it was very easy to get it wrong. It was great to see Zen get two bullets as class newcomers.”

On the status quo going into the final and deciding three races tomorrow, Saturday March 28, ‘Chappo’ says, “It’s tight and everyone’s getting better. Some of the others have closed up on us. We are all capable of winning races. We seem to get off the line a bit better, and we hike hard.”

The front pack of the mostly Tassie crew in red crew shirts look like they are indeed folded in half when Voodoo is hard on the wind and they are on the rail hiking their weight out.

This is Ketelbey’s first full season of Farr 40 racing and he says these nationals are shaping up as the best of the 2014/15 timetable. Zen’s two wins today in the glorious autumn warmth could have something to do with the proud-as-punch owner rating this particular regatta above the series of lead-in events.

“It was good to start and finish the day with a first…excellent excellent. It was a typical westerly… left right, left right and all over the place,” said Ketelbey. “You needed a good tactician to spot the shifts. There were lots of passing lanes and it’s amazing how quickly positions changed. Even the fastest boats came last, or close too. The good thing is that everyone had an opportunity.” 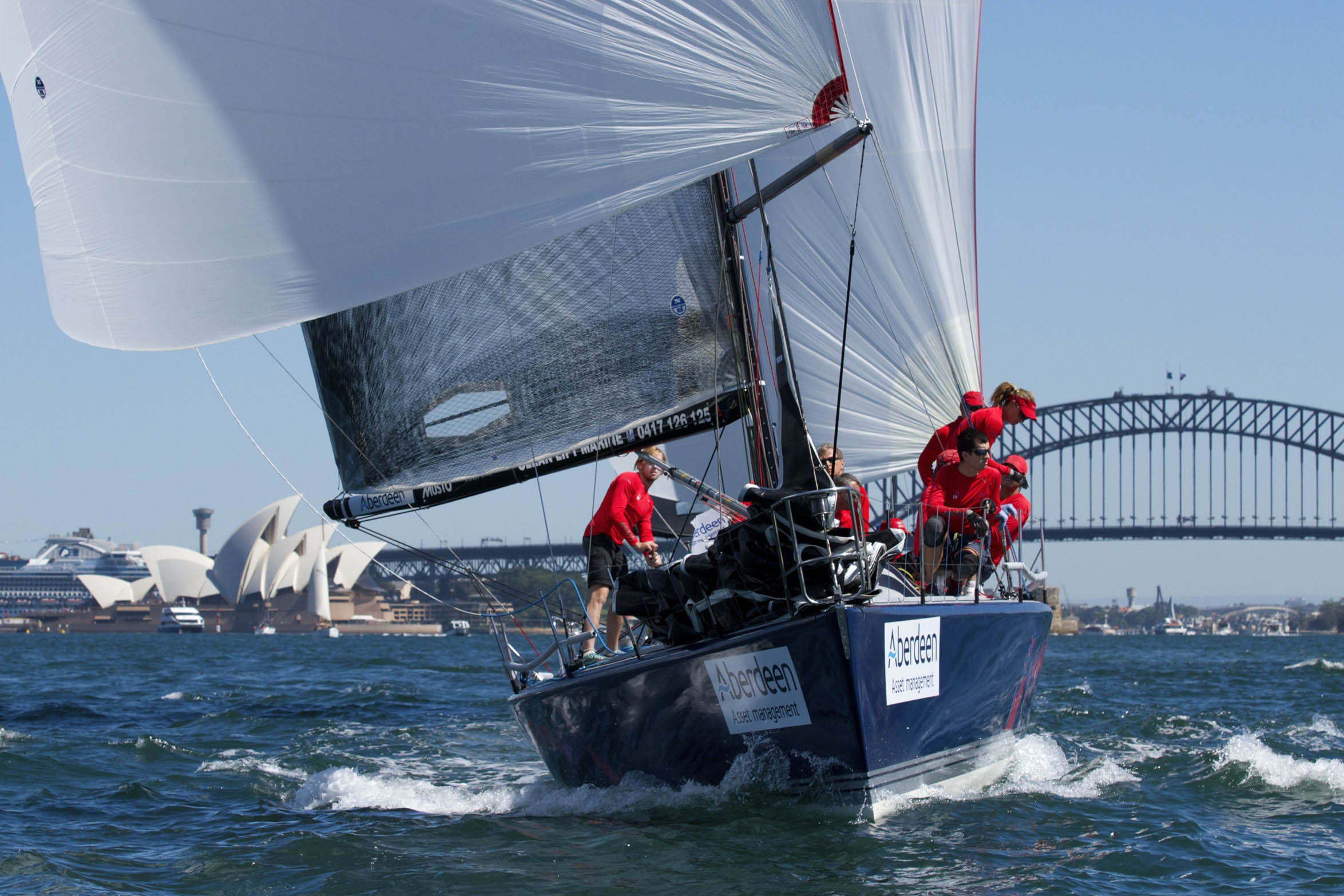 JCJ Nationals 2015 Voodoo Chile TAS credit Pete HarmsenThis afternoon it was confirmed to the Australian Farr 40 owner group that Sydney is hosting next year’s Farr 40 world championship, and Ketelbey says Zen is going all the way to the pinnacle event. On the decision to buy into the Farr 40s he added, “Farr is such a beautiful design. Quite a few of the old timers say it’s one of the best designed boats of the last 20 years. With most sailboats you are continually hunting for breeze, the Farr is so powerful it just gets up and sails itself, virtually.”

The last time Sydney hosted the Rolex Farr 40 World Championship was out of the RSYS in 2011 when a young Chapman called tactics on an overseas entry called Strunje Light. He smiles as he recalls that they hit Voodoo Chile during the international series. Not a moment to add to a tactician’s CV, though it didn’t dissuade Voodoo’s two Hobart based owners. “They were desperate,” Chapman jokes. The partnership with Chapman is now three years on and thriving.

Chapman says the plan for Voodoo’s crew tomorrow is to keep getting good starts, stay on the front foot and continue attacking. “So far in this regatta we’ve done our own thing. I know my father’s been out there watching and apparently I’ve given him a heart attack because I haven’t been covering. It’s a bit hard in a westerly.”

It was a forgettable day for the defending Australian champion and yesterday’s clubhouse leader, Transfusion. Thankfully a strong set of day one results is holding their top tier position.

Newest to the class in this fleet is Rod Jones and his Kindergarten crew sailing for Middle Harbour and Mooloolaba yacht clubs with a combined NSW/Queensland crew, currently in fifth. “For us we need more exposure to the pressure, it’s so early in our program,” Jones understands. “You never felt safe out there today, it’s the same for everyone. It’s great fun though – it would want to be, it hurts too much!”

Tomorrow’s forecast is for SW 10 -15 knots turning south to SE below 10 knots in the morning becoming east to SE in the late afternoon. The class is aiming for a 12 race series with the first of the final three scheduled to start at 1100hrs, Saturday March 28, 2015.

Please find below the day 2 video highlights from the Aberdeen Asset Management 2014/15 Farr 40 National Championship for the John Calvert-Jones Trophy.

Jennie Hughes
Farr 40 Class Administrator
M: 0407 387 302 E: This email address is being protected from spambots. You need JavaScript enabled to view it.

Lisa Ratcliff
On Course Communications/Australian Farr 40 media
M: 0418 428 511
E: This email address is being protected from spambots. You need JavaScript enabled to view it.