Santa Barbara, Calif. (22 August 2015) – As if on cue, the scenic backdrop of the Santa Ynez Mountains was revealed for the final day of racing at the Rolex Farr 40 North American Championship. While the clouds cleared off to uncover the scenic vistas, the wind continued to tease the competitors and it wasn’t until within minutes of the time allotment elapsing that the 10th and final race of the series got underway in six knots of breeze ultimately reaching 12 knots by the conclusion of the race.

Chicago architect Helmut Jahn, the 2012 Rolex Farr 40 World Champion, had taken over the leaderboard on the second day of the series and never relinquished it. He started the final day of the championship with 31 points and a slim three-point lead over Italy’s Alberto Rossi on Enfant Terrible, while Germany’s Wolfgang Schaefer, on Struntje light, was a further two points back with 36 points.

Rounding the first mark within seconds of each other, the championship was decided when Jahn was fourth across the finish line, with Rossi seventh.

“Because we did well, we feel we earned it,” said Jahn of his second Rolex Farr 40 North American Championship title (his first was won in 2009 in Chicago). “It’s always great to win a championship. The consistency we had, that was the key. We had a lot of ones and twos and threes, so today we just knew whom we had to watch out for. The way the race unfolded it’s interesting that the top boats all ended up in front. So, there is some justice to the madness.” 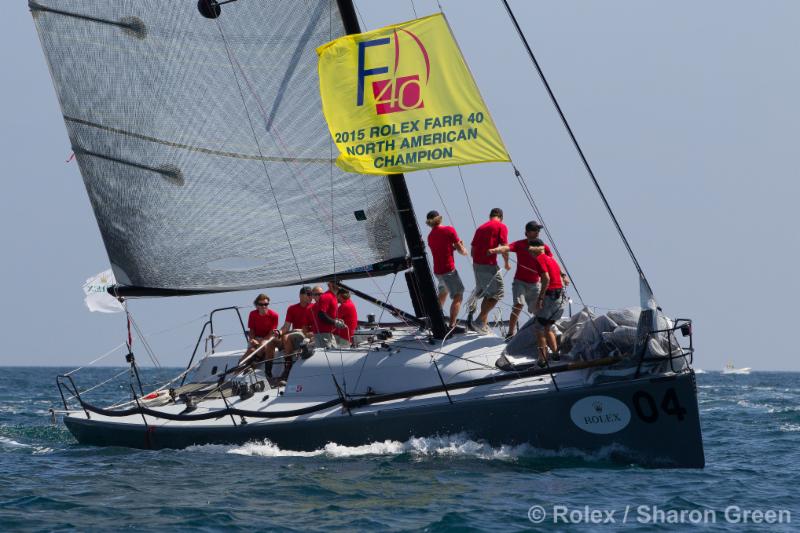 As to what he will do with his new Rolex, Jahn added: “Maybe I’ll keep one watch in Berlin and one in Chicago. That’s a problem that’s a good one to have.”

Jahn’s tactician, Morgan Larson, described the final race as nerve wracking “Because the pressure’s on, the points are close, and the level of the fleet is really high. Even though we won, I wouldn’t put ourselves as a top-three team; we’re still evolving and we have a lot to prove and a lot to learn. We were trying not to think about the champagne. The fleet was tight so if we dropped a couple and somebody else gained a couple it would have been a different result; that makes it exciting and I think that’s what everybody is here for.”

It was a standout day for the Corinthian teams as one of the newest to the fleet – San Diego’s Rick Goebel and his team on Insanity – took the win of the day’s race. Lloyd Clark, who took home the overall honor of top Corinthian boat with the Tasmanian-based Voodoo Chile, finished a close second to Goebel.

“The first two races we had a really good start to the regatta, the last race we had a good finish [second], and in between we were a bit up and down,” said Clark who ended the championship in fifth place overall. When asked about the level of competition he added: “The top boats are very hot. They are very, very good; excellent crew work; really fast and well-managed. Every time we do a regatta we learn something from it. We are very happy with what we achieved here.” 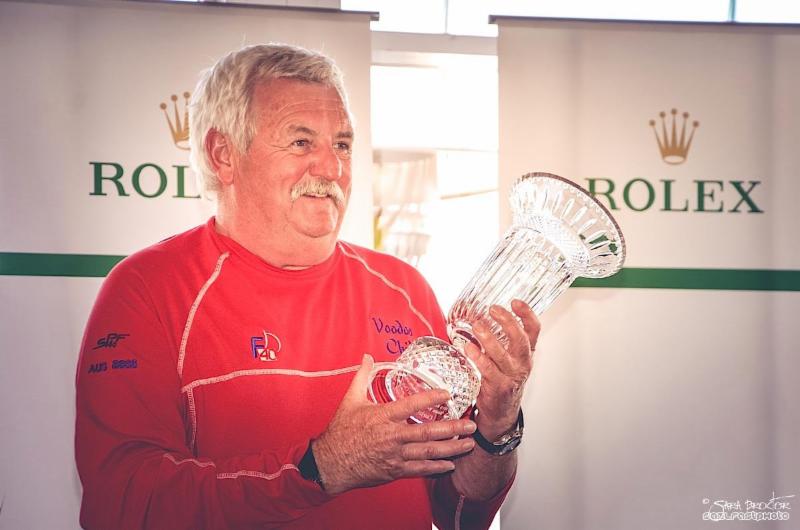 The seventh-place finish by Alberto Rossi’s Italian-flagged Enfant Terrible dropped them to third in the overall standings, with 41 points, behind Germany’s Wolfgang Schaefer, on Struntje light, who finished third in the race to move up to the second podium spot with 39 points. New York’s Alex Roepers, on Plenty, finished the race in sixth place to hold onto fourth overall with 44 points.

The relationship the Farr 40 class has with Rolex is as timeless as one of their timepieces. The work the owners and crew put into winning an engraved Rolex is one of precision and dedication. It is a special moment for an owner to be presented with the engraved Rolex watch, symbolizing perfection and the pinnacle of their achievement.

Racing resumes tomorrow, Friday, August 21, and concludes Saturday, August 22.  Additional information on the 2015 Rolex Farr 40 North American Championship, including daily race reports, full results and photos will be found online at www.farr40.org. Follow the event via Twitter or on Facebook.